Wordtrip wrote:The Picture Perfect Writing portion of Wordtrip is used to inspire writing through the "VISUAL" of life. Look at the picture below and write whatever comes to mine... short story, Fast Fiction or novel... even a poem may be inspired from this picture. 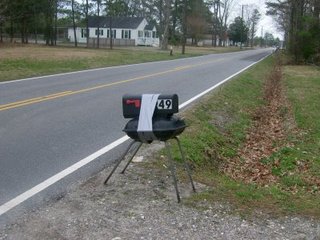 My blog is at http://anblicksanamorphosis.blogspot.com/
Top

Tell me this isn't your mailbox.
"Come to the dark side; we have coffee!"
Top

He's married now. He's got to make ends met somehow.
Is this my reality or yours?
Top

Anybody remember the `Mailbox Baseball' scene from Stand By Me??
Ethics are so annoying. I avoid them on principle. -- Bucky in the Get Fuzzy comic strip.
Top

"Perhaps you'd better get that." I shrugged.

"Would you me like to answer it?" I asked him politely, noticing the way he was twitching in time with the ringing.

"Would you?" He sounded eager, so I stood up and went to the door.

"Yes? What do you want?" Tyler stared at me a moment, surprised I'd come so quickly. I usually made him wait fifteen minutes or more before I was finally irritated enough to answer. He was a shaggy sort of guy- which was enough to irritate me on all its own without his whole stalker, irriating-football-player personallity.

"Why did you get a new mailbox?" he asked the first thing that came to his small mind, still in shock at my quick responce.

"So I can burn your love letters without having to soil my house by bringing them over the threshold to the fireplace. Now would you please go away? Its not a good time."

"You always say that. Last time you wouldn't even open the door, because 'it wasn't a good time.'" I sighed, resigned to explain this again.

"It's for your own good, you dolt. Last time I was so mad that I probably would have taken a chain saw to your anatomy if I had been forced to talk to you."

He laughed as though I'd been joking. "You're not mad at me now." He finally said.

"Yes," I informed him, "I am. But I'm not stupid enough to kill you in front of a cop." That set him off again.

"What's a cop doing at your house?"

"Questioning me about your murder. They found your body last night- part of it anyways."
~Saphyre
For the wages of sin is death, but the gift of God is eternal life through Christ Jesus…
For by grace you have been saved through faith… it is the gift of God, not of works, lest anyone should boast.
Please always feel free to critique anything I write as I am by no means perfect!
Top

Oooo I'm intrigued! I hope there's more. There is more isn't there?

Is this my reality or yours?
Top

Not really. I actually wasn't going to respond to the topic, but if you want the truth I had to run to the toilet after viewing this and got inspired there. I don't know how he's dead and still bugging her (because she's not crazy, he really is there) but I've been reading this compilation of short stories called 100 malicious little mysteries and they all end with a twist like this. Maybe he has a twin or something... OUOUOUOUOU! I just figured it out! Here you go (and thank you for being my muse):

"Excuse me," interjected the cop, who had come up behind us as we stood on the threshold of the house. "But are you Tyler Welts?"

"Yeah. What do you mean, you're investigating my murder? I'm not dead!"

"I can see that,” the cop grudging admitted, mentally comparing Tyler's not-so-handsome face with the head they'd pulled out of a dumpster in downtown Denver. They sure looked alike... "Do you have a brother?" Tyler shrugged.

"Maybe. I'm adopted, so I wouldn't know." The cop gave us both a mistrustful glance. "I'll need a sample of your DNA." Tyler shrugged, happy for anything that would allow him in the door. I snarled as the cop led him into MY house, and didn't quit growling until they were both gone. In a twisted, tiny way I was a little glad Tyler wasn't dead, so I could someday kill him myself.

TWIN MURDERS! 11/23/2017
Many of you will remember the events of one November 8 years ago, when Tyler Welts was mistaken for his twin brother, Kyle Jones, who had been killed in his home in Denver Colorado with a chain saw. History has now repeated itself, as the saying goes. Tyler Welts is dead, cut to pieces as his brother was, and suffered to have his limbs dumped in various trash bins around the state. Police are questioning one Miss Joan Hilter, age 25, as a possible suspect.
Hilter was also a suspect eight years ago, before the mix-up was realized. When asked why she would be under suspicion, she answered: "He was stalking me, bugging me... from the moment I entered high school he made it my personal H***. When high school ended he followed me. I went as far as to install a barbeque grill under my mailbox so I could publicly burn his letters, which he sent in addition to calling, texting and e-mailing me no matter how many times I changed numbers or e-mail addresses.
"Did I have motive? You bet. I even used to dream about it sometimes. But I didn't kill him. He quit bugging me about four months ago. Why would I kill him now- when I finally had the peace I wanted?"
Although Hilter has a solid alibi for the night of the murder, the police say she remains under suspicion.

DOUBLE TROUBLE! 12/3/2017
The mystery of Welts' killer was solved this Thursday by Santa Barbra Police. Miss Lauren Omaba, who was stalked by Kyle Jones prior to killing him, is also responsible for the death of his brother Tyler Welts. After her release from Denver State prison four months ago she moved here to Santa Barbra for a change of scenery. At that time she was mistaken by Welts for the object of his own obsession: Joan Hilter. From then on Welts turned his attention to Omaba, stalking her in the same way his brother had until she killed him eight years ago.
"Personally, I don't blame her." Said Hilter. "I told you guys before that I had the motive and even dreamed of doing it myself. But I was able to resist because I had built up a callous to him and had releases like burning his letters. If I had enjoyed eight years of peace from him- prison or no- and then suddenly had to suffer him again, I would have killed him outright. I'm just proud of her for holding off for four months."
Evidently Miss Hilter and Miss Omaba are also twins, separated at birth by adoption. "It makes you wonder if this wasn't in the genetics." Remarked Lotze, the head of this investigation. Whatever it was- a fluke, fate, or a science- if it turns out they were all triplets we'd best keep the remaining pair apart.
~Saphyre

For the wages of sin is death, but the gift of God is eternal life through Christ Jesus…

For by grace you have been saved through faith… it is the gift of God, not of works, lest anyone should boast.

Please always feel free to critique anything I write as I am by no means perfect!
Top

mae
Wordtrip Grand Master
Posts: 2492
Joined: Mon May 09, 2005 11:54 am
Location: Northwest corner of Washington state, snuggled up next to Canada

mae
My heart beats in poetry. I think in rhythm and dream in rhyme.

Give me a crit! I can take it!

For the wages of sin is death, but the gift of God is eternal life through Christ Jesus…

For by grace you have been saved through faith… it is the gift of God, not of works, lest anyone should boast.

Please always feel free to critique anything I write as I am by no means perfect!
Top
Locked
10 posts • Page 1 of 1