Remember... all of your participation in the Wordtrip challenges go towards your chances of being the next WotM.

jillstar wrote:The Picture Perfect Writing portion of Wordtrip is used to inspire writing through the "VISUAL" of life. Look at the picture below and write whatever comes to mine... short story, Fast Fiction or novel... even a poem may be inspired from this picture. 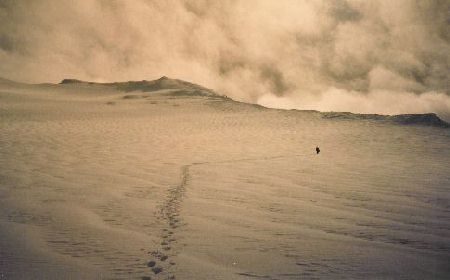 This week I thought we would focus on solitude. I was told this was a picture of a person walking in the snow... but as Charles points out, it looks like sand. So... it is up to you to decide if your character is walking in snow or sand.

Where is this person going? Why is he or she alone? What is there to be found in the mountains? Is this the last trip this person will ever make? Will this person be taken by aliens? Is he meeting a large group of people for a big party on the slopes?
Last edited by JillStar on Mon May 16, 2005 4:13 pm, edited 3 times in total.
Fast Fiction Friday Blog 2011-2018: Additional FFF Prompts
Top

Anything like a traveler?
My blog is at http://anblicksanamorphosis.blogspot.com/
Top

This is the kind of picture that evokes that gut-wrenching response that writers love/hate. I am looking forward to the responses to this challenge, and may even give it a try myself.
This sparrow
who comes to sit at my window
is a poetic truth more
than a natural one. ~William Carlos Williams
Top

Apparently, my fingers have minds of their own.

This is the kind of picture that evokes that gut-wrenching response that writers love/hate. I am looking forward to the responses to this challenge, and may even give it a try myself.

This is not so much a story but a character sketch. I was trying to explore what a person might look like in this situation. Here it is:

He walked on. It would be there; over the horizon. If not this one, then the next. He hung his head and walked. The sweat dripped off his body and added another trail in the desert sand. It joined a trail of shuffled foot prints staggering across the sand. Snaking up one dune and tumbling down the other side. The desert sand clung to his body longer then his rambling trial clung to the shifting sands.

His sweat stood glistening its own trial through the grime of his face. His eyes shone like beacons of madness in his dark face. The sunburned redness of his skin was covered by a darkening coat of sandy grime. He wiped the sweat from his eyes amazed that the relief of the storm clouds, from the desert’s heat, could have a danger all their own. His hand left a scar of cleaner skin exposed like a putrid display of life on the sand scorched landscape all around him. His long hair curled up over his ears in the humid respite the approaching storm brought.

He wouldn’t make the mountains before the storm broke so he would be forced, out in the open, to face the storm’s onslaught of pelting sand and rain as he walked on. To stop and huddle under the oppressive might of the demon called storm would risk being buried alive. He wouldn’t take that risk again.

With his water bags long since emptied and abandoned he licked his lips. His dry coarse tongue only scratched his chapped, peeling lips. It lingered in the corners of his mouth, in the scabbed split of his pale pink lips, but there was not even his own blood to moisten his tongue anymore.

He hunched his broad shoulders against a gust of wind but they weakly sagged with the exhaustive length of his journey. He had no more defenses left on his journey. His legs once strong and muscular stretched down to his feet like withered reeds on a dry river bed barely holding his weight as he took one step after another. His feet kept their rhythm despite the burning pain shooting up from the exposed soles. They moved in a tired shuffle step each barely striding more then a few inches in front of the other foot before sinking into the shifting sand and rising to start the process all over again. It was a new dance they had learned on this journey. As mindless and routine as the “Circle” and the “Waiting Fan” had been in his youth.

Those days in the village of Marpai were long gone. Grey streaked his hair at the temples letting their devouring tendrils of silver steal the handsomeness of his youth. But he had a purpose. A destination and a goal when he got there. So he walked. Until this horizon, or the next one, brought him to that place. He walked on.
Is this my reality or yours?
Top

Hey . . . I rather like this. I feel a hopelessness (sp?) for this guy... I want to walk over to him and slap him a few times telling him he needs to take up some other journey because this one is doomed.

I've added this to my list, which is long...
My blog is at http://anblicksanamorphosis.blogspot.com/
Top

I don't know if it's doomed (since I don't know what the journey is for), but it's certainly taking it's toll on him.
Is this my reality or yours?
Top

Isn't that part of the story?
My blog is at http://anblicksanamorphosis.blogspot.com/
Top

I guess. But as the writer I'm always the last to know.


(Anblick you should know the inspiration for this piece)
Is this my reality or yours?
Top

Arggh! PM me to remind me! I'm like Dori from Finding Nemo most of the time!
My blog is at http://anblicksanamorphosis.blogspot.com/
Top

I loved your story pengwenn, I want more!

This picture ellicited such a strong emotional response that I found it difficult to write, but here is my modest attempt.

My footprints pursue me
relentless and unraveling across the
frozen tundra of my life.
Feet sinking into the deep drifts
the merciless wind has blown across my path.
I continue on—struggling
My face a mask of frozen wax
And so cold
I’ve lost all feeling.
Wolves are howling in the dusk
Or is it the echo of my own pain
bouncing off the leaden sky ?
I see the edge now…
The edge of the world where
I can step off into the white,
Into the swirling mist of the
Abyss.
Free-falling into the place
where my footsteps halt their pursuit
of me.
This sparrow

Wow Alabaster... That flows very nicely. I like the feeling it gives... well... I don't know if "like" is the proper word as it makes me feel lonely, lost and desperate for some type of sanctuary. Thank you for sharing it with us!!
Last edited by JillStar on Sat May 14, 2005 11:23 pm, edited 1 time in total.
Fast Fiction Friday Blog 2011-2018: Additional FFF Prompts
Top

The loneliness
of the desert,
a solitude
as deep as the soul,
bidding me recognize
my own mortality.

But, oh, the long vista
rolling away forever
beneath a canopy of stars
as countless as the grains
of sand I tread. It
lifts me beyond myself
to a place between
reality and dream.
nothing is ever simply Yes or No. There's always a But...

I am impressed with how people can look at the same picture and interpret it in such contrasting ways.
This sparrow

That's what I love about the word lists and pictures. It fascinates me, the individual spins that different writers will put on the same subject matter.
It's like a kaleidoscope...the same basic material, yet different every time.
(Hey, I think there's a poem in that. I'd better get right to work on it. )
nothing is ever simply Yes or No. There's always a But...

I'll be waiting to hear it!
This sparrow

I don't suppose you'd accept a direct quoting of the lines from Greenday's Boulevard of Broken Dreams, huh?
I like stupid people. They're like cupcakes, only stupid.

Traveling alone through this
heat searing pain,
no one to comfort
and nothing to gain.

My sighted eyes search
the vast empty space,
and ears turn to hear
one last hymn of grace.

Alone, alone, I must
tread the abyss,
whose darkness enfolds me--
no one will miss.

How long I've traveled
I cannot recall;
what is before me
is now a great wall.

Clouds obscure futures
that come overnight
And the pains return
to fill me with fright.

Alone, alone, so alone
with my pain,
No one to comfort
and nothing to gain.
Dark eyed Junco
Top

This picture has inspired some great writing. I love the flow of this one snowbird (yeah... it's all about the flow for me

Nice one, snowbird!
nothing is ever simply Yes or No. There's always a But...

Hey i'm totally inspired by u gyz looks like i'll post something too. BTW can u post replies only on mondays or anytime cuz i'll take some time doin it.

Users browsing this forum: No registered users and 1 guest